The blogosphere seems to have finally caught up with [tag]Facebook[/tag]. As a lot of my friends are still at Uni, I’ve found myself in at the deep-end for the best part of a year now.

And my good it was good. It took everything that was good about [tag]Myspace[/tag] and solved all that was rubbish. Combined with a large proportion of my friends already having profiles it was just about perfect. 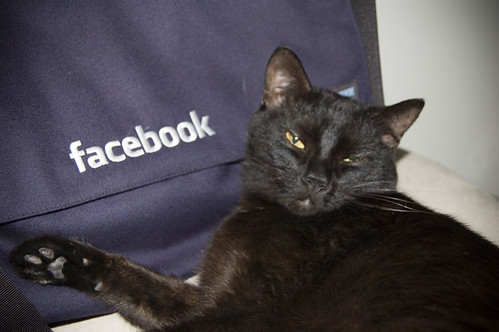 However it seems that utopia couldn’t last forever; I don’t know whether it is just the volume of users or bad strategy but everyday the site becomes a little less vital for lots of reasons. And the [tag]Facebook backlash[/tag] starts here

Spam Friend Requests – the fake friend requests ruined Myspace and it seems Facebook is destined for a similar fate. In the last month I’ve had about six dodgy requests. Not a bad signal to noise ratio but, compared to the previous ten months when I’d had none, it doesn’t seem so spectacular. I know spammers will go where the people are, but that doesn’t make me any less disappointed

Roll Over Banners – this week there has been a roll over banner for the movie sequel to Hostel. One of those hugely annoying ones that covers the whole screen and cues audio if you go within two miles of it. I’ll admit it’s a reasonably relevant advert, but it’s far too intrusive.

I was at home at my parents at the weekend and quickly fired up my old eMac to check Facebook and the advert even managed to crash the pre-historic version on Safari I had installed. As a one off it wouldn’t be that bad, but I fear the worse is still to come with rich media ads.

Application Notification – I know you can manually switch the notifications off, but it’s still annoying being spammed to join another stupid application that has zero functionality and gets ignored by most users after a week.

Cluttered Profiles – everyone has hailed the applications using the [tag]Facebook API[/tag] as a masterstroke. As a PR-stunt I’d agree, everyone has been fawning over the applications, but they’ve ruined the minimalist profiles that were part of the reason a lot of people switched from Myspace. Yes they are more consistent than Murdoch’s sea of spam, but that’s daming with faint praise.

System Maintenance – last few weeks I’ve had touble accessing the systems because the site was down. I know downtime like this is essential but it seemed poetic justice when I was researching this piece that the site was unavailable.

Don’t want to be like those people who complain that they prefer bands before they got big and ‘sold out’ but it’s a real shame to see a service that was so great so quickly going down the pan.