One of the first things I decided to do when to do when I started to learn about search engine marketing was keep to myself the SERPs for my own name. I must admit it wasn’t particularly difficult as there aren’t too many web savvy Kelvin Newman’s out there.

Recently I began to feel a bit guilty about the sheer volume of me-ness showing up in Google whenever I carry-out a vanity search; what if there was another couple of Kelvins out there who were nowhere to be found because of my canny online reputation management?

Fortunately for them there is not that many references to my name online, so they’ll might stand a chance, but what about the poor souls who share a name with some of the rock stars of the search industry? 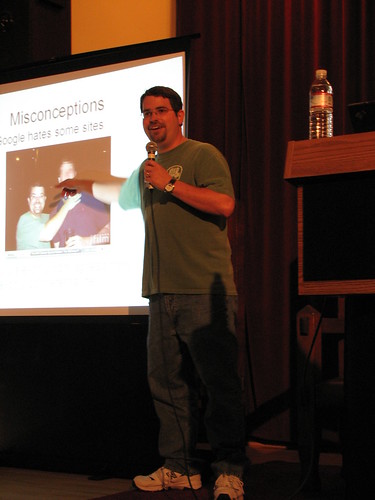 I thought I’d do my best to redress the balance by sharing some link love with them and highlighting some of SEO’s namesakes.

[tag]Matt Cutts[/tag] – we’re all familiar with the friendly face of Google’s web spam team. Not surprisingly, given how the blogosphere analyses his every word it’s tough for another Matt Cutts to break through to his rightful place in the SERPs. Which is ironic as he is an actor who’s performed as Munkustrap in Andrew Lloyd Webbers ‘Cats’ which is Google’s M.C’s favourite musical.

[tag]Danny Sullivan[/tag] – Search Engine Land’s top cheese has his own namesake, a US Racing Driver, he manages to scrap his way into tenth place on Google UK. While he may not have established two behemoths of the search marketing publishing world the new Danny Sullivan did come third in the 24 hour Le Mans race, which is pretty impressive.

[tag]Aaron Wall[/tag] – he has written the e-book which is a rite of passage read for anyone learning search engine marketing but his prolific online presence denies another Aaron Wall his share of the limelight.
Although he passed away in 1905 this Mr Wall co-founded the Evangelical Mennonite Brethren in southern Russia before moving to the United States.

[tag]Dave Naylor[/tag] – apparently the nicest bloke in SEO the UK’s own has done quite a good job buying up all the search engine results real estate at the expense of a ‘hyper realistic’ artist. Personally I’m not a fan of this Dave Naylor’s work, it looks like he’s just downloaded some photos and run them through a Photoshop filter, but that doesn’t mean he doesn’t deserve some linkage.

[tag]Andy Beal[/tag] – I’m a columnist over at Marketing Pilgrim, so I probably didn’t ought to criticize Andy for his search results monopoly, but he’s got a harder job than most keeping them to himself, he has a namesake who is ‘notable’ enough for Wikipedia. This Andy Beal is a self made millionaire with a penchant for crazy poker bets, like two peas in a pod!

I’m sure there’s more namesakes out there who need help to reclaim their results. If you can find any let us know and we can all do our little bit to redress the balance.