I’ve been thinking about music festivals this week with [tag]V 2007[/tag] coming up. I’ve not gone to any [tag]music festivals[/tag] this year; it seems like the first time in ages I’ve missed out. It hasn’t stopped me checking a lot festival websites on a regular basis, and its surprising how little the websites are embracing [tag]rich media content[/tag] and [tag]social media[/tag]. 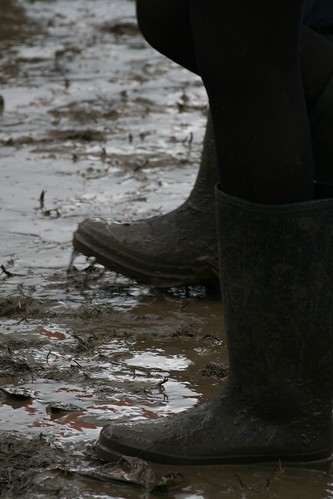 Why didnt we watch it on the telly – via flickr

Reading Festival’s 2007 offering is better than some of it’s competitors with a forum, but Glastonbury & V 2007’s offering is a frankly embarrassing. Where is the ability for the audience to interact with each other? Why isn’t there video and audio that is easy to share?

I know it’s easy to criticise other companies’ strategies, so I would try and understand some of the reasons why they might not be taking advantage of these opportunities

Labels too protective over rights – It’s no big secret that record labels are pretty protective over their copyrights, maybe that’s the reason there isn’t video or live recordings from performers. Though given the huge upswing in albums sales after a festival performance, you’d think the labels would be bending over backwards for the exposure

Scared of critical Feedback – if you ever been into e-festivals forums you’ll be aware of some of the vociferous criticism some of the festival organisers come under. Maybe this negative feedback is discouraging the festival organisers from allowing user generated content onto their sites. Personally I’m a big believer in engaging in conversation with your critics, but I can understand their reticence.

Worried of Impact on Television Coverage & DVD sales – maybe the reason they aren’t making use of video on their websites is concern that it will affect their ability to charge for television rights or sell DVDs. There might be some truth in this theory, but the chances are the extra buzz, customer engagement and the brand loyalty it would generate would far outweigh any downsides.

No Real Community – first impressions would suggest the audience of a festival would seem like the perfect community to build a website around, they have shared values, similar interests and once a year are all in one physical place at once. Though once you peak under the surface there are lots of smaller quite disparate groups attending festivals that might not mix well on the internet. However I think the community has more in common than a lot of other popular online communities.

Worried about the Traffic – every year when tickets go on sale they have a deluge of traffic which usually sends most servers to their knees. Maybe they don’t want this high volume of traffic all year round but bandwidth has never been cheaper. I’m sure they could even find willing sponsorship partners; it seems everything else to do with the festivals have a commercial endorsement of some kind or other.

It’s a shame I think the community, content & audience are already their for music festival sites and it’s a pity none are brave enough to make that next step.