It’s hard to believe the newly re-launched Apple Pie and Custard has been around for a month already. We’ve been working really hard on it and are really chuffed with the results.

Thanks to all of you too, cheers for the Sphinns, the stumbles, the comments, the subscriptions and especially the links! 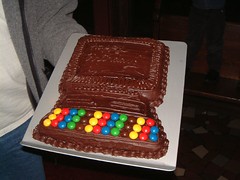 At the end of every month we are going to run down our top five stories by traffic firstly to share some of our greatest hits with any new readers, give you a greater idea what’s driving our traffic and hopefully make you feel part of our little search engine marketing blog experiment.

10 Commandments of Social Media Marketing – a huge success due in part to a good few thumbs up on [tag]Stumbleupon[/tag]. Despite what people say, the quality of traffic from this social media source was actually really good; with a bounce rate of approximately ten percent lower than the more targeted search specific [tag]Sphinn[/tag].

Top Ten Sphinn Avatars – Despite only being a few days old, Eloi’s post about the most successful and eye catching Avatar images used on Sphinn, has been a major hit, not surprisingly, on Sphinn. It’s sparked plenty of debate on the blog and is probably a topic we’ll revisit in the next couple of weeks.

Calacanis is a Better SEO than you’ll ever be – possibly the most ‘link-bait-y’ title I’ve ever written, but it certainly did the trick. [tag]Jason Calacanis[/tag] himself picked up on the piece and sent us a sizeable chunk of traffic. Though my arguments in JC’s favour doesn’t seem to have done him any favours – as he’s still getting plenty of stick.

What’s it like to be an SEO Chick – everyone’s favourite Nordic drinking buddy, [tag]Lisa Ditlefsen[/tag], was able to send us a load of traffic by ‘Facebook-ing’ her friends to come and visit. I’ve been really pleased with all our Search Marketing Interviews and will be planning a few more. So if you think you’ve got something interesting to say or know someone who does; be sure to leave a comment.

We’ve got some great ideas for blog posts over the coming month and hopefully come October 1st (By when I’ll be the ancient age of 24!) we’ll have some even better pieces to recap.