With the English football season kicking off proper this weekend, a lot of football fans like myself are starting to get a bit bored of waiting. While looking around a few teams websites to see who they’d signed; I began to notice how useless most of their websites were.

Google do their bit to acknowledge Soccer Ball – via flickr

So in between picking my fantasy team I thought I’d do a little research on which team has the best [tag]SEO strategy[/tag] in place.

Not surprisingly most of the sites of [tag]Premiership teams[/tag] were pretty terrible when it comes to SEO. Fortunately due to the volume of links most don’t struggle to rank on their team and city search terms. Though were most were no where in the top five for variations on terms like “Newcastle United News” & “Chelsea Tickets”

Even the most inexperienced SEO could tell you the reason most sites weren’t ranking well.

Terrible Splash Pages – Loads had flash or image heavy splash pages with hardly any text, which is useless for spiders. Fortunately in most cases Google had realised and chosen an internal page as the top result.

Off their own domains – I don’t know who the guys are at PremiumTV.co.uk but they are on to a winner. They are the web designers behind a lot of the teams’ websites and have hosted the official pages on their own sub domain like for example SEOAllStars.premiumtv.co.uk would be the domain of Site Visibility’s Five Aside Team. A great way to hoard the link juice, but a terrible branding exercise from some of the biggest brands out there.

Fortunately I think most of the clubs own their generic domains but are 301-ing them to the sub domain they don’t own.

Useless Title & Meta Tags – A few of the sites have varying title tags, which aren’t that descriptive, but in every other regard most of the sites are a perfect example of how not to deal with your tags from an SEO perspective.

But enough of the gripes lets see who’s reigning glorious and who’s been relegated. 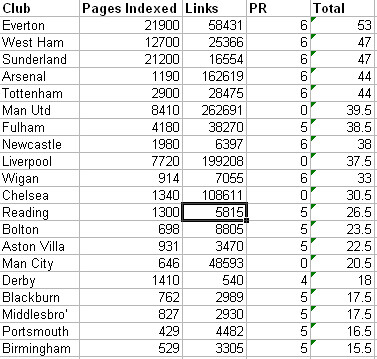 There would be a few unhappy book makers if the real league looked something like this.

This kind of analysis is far from scientific but the proof remains most clubs are missing out on visitors with their rubbish search engine marketing strategy.