The attack hook is one of the most effective but risky ways to attract links. If you’ve got something to complain about and the target is high profile there’s a good chance you’ll gain some attention and often links. 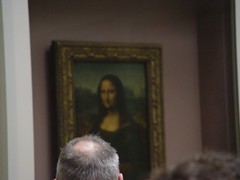 Nobody wants to be a mona lisa – i’m here all week, enjoy your steak – via flickr

For a professional company blog or established industry figure it’s important to understand when it is an isn’t ethical to criticise other business and individuals.

In the last week or so there has been some furore within the small world on search engine marketing.

I’ll try and summarise the story as briefly.

Wired were inundated with spam.

Danny & co. received a large amount of criticism from some corners of the SEO community.

Some people accused the critics of using the same cynical attack tactic.

I don’t want to fan anymore flames (personally I think everyone got a bit carried away) but the situation highlighted very real decisions professionals using social media have consider.

If you have a problem with another company when is it acceptable to voice that concern publicly with the aim of attracting links?

You think they wouldn’t respond without the fuss – some companies have a reputation for not responding to customer feedback. If the company you intend to condemn is guilty of this charge it might make sense to air the dirty laundry in public to encourage them to react or respond.

They called people out in the past – if they’ve used the tactic themselves against other companies I personally see them as fair game themselves.

Let’s take Graywolf & Shoemoney as examples, in the past both have shared their strong opinions on companies and individuals and have benefited with links.

They understand how the system works so would largely have no problem with being called out in the same way.

The public needs to know – there may be circumstances where you serve the greater good by criticising people in public, it might be a safety concern with their product or to help people avoid losing money.

However an old cliché here applies. People in glass houses shouldn’t throw stones. If you record isn’t spotless I’d think twice about shouting too loud about other organisations faults.

Exhausted other options – maybe you’ve been on their customer service line ten times in the last fortnight for an hour at a time if you’ve run out of more subtle and private ways to complain it is time to fire up the virtual megaphone.

Every situation is different, and many decisions will come down to judgement and personal standards. Hopefully when just you won’t be scared to talk and equally you might avoid putting your foot in your mouth.