I don’t like getting the tube in London, being a born and bred Brightonian I find it confusing. The one upside however is tube advertising is in my opinion some of the most innovative in the world. This Orange ad caught my attention this week for its attempted use of offline/ search marketing integration. 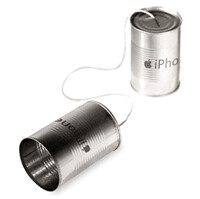 Anyway, waiting at embankment I came across the latest Orange brand campaign 30 foot wide in front of me. I’d seen the TV ad and already though this was a pretty stupid campaign. The premise is Orange are somehow sponsoring a chap called Mark Beaumont who is apparently cycling around the world. (It actually turns out he’s lied- he’s cycling around different parts of the world in 7 stages and I presume getting planes between continents, also he’s taken over 6 months to do it so I presume he’s stopped for food and sleep which for me defeats the point entirely!!!)

What drew my attention to this poster in particular was in the bottom left corner where you might expect to see a web address for a campaign microsite instead it said something like:

“search the web for ‘I am’ to find out more”

This isn’t a new idea by any means- remember AOL keywords. But it did catch my attention- why did they choose to use this instead of just giving a weblink to the site, at first I thought it was pretty clever actually…

– Using the keyword in print ads and the url on the TV ad would allow them to distinguish between visitors to the site responding to TV ad and print exposure (they haven’t done this, but they could of)
– They could also be really clever and vary the keyword slightly for different locations so ‘I am’ on the tube, ‘I do’ on the bus (they didn’t do this either but they could of)
– Its kind of memorable (stuck in my head where a web address probably wouldn’t of)

But then I start to look at this from the flip side, I’m a young upstart vodaphone exec and I see this poster- surely I get back to Vodaphone HQ get on the phone to my PPC agency and get them to bid on ‘I am’ in Adwords (should be pretty cheap) and get my latest promo right up there next to Orange, piggybacking traffic off millions of pounds of Orange advertising $$$$$$$$$$$$

Anyway so now I’m suitably curious and its still 2 minutes before the train comes so I pull out the iPhone with the intention of Googling ‘I am’- “we’ve got 1” I hear the marketing buffs at Orange shout. Wait- no wi-fi on the tube yet, it’ll have to wait.

Ok so I’m on the train back and time to have another crack at it. Sure enough there’s a little PPC ad there. Unfortunately the landing page is knackered, blank page with a little error message. I feel my faith in Mark Beaumont wavering… if I hit the back button now and saw the Vodaphone ad I’d definitely be tempted to swap my loyalties, but Orange are the only one’s advertising.

So I run the search again last night and again the Orange ad comes up top but now 3 other ads have joined it. Another Orange ad, this one for the Orange shop (maybe run by another department?), 1 for some weird sleeping bags with arms and legs and the other headlined ‘I am gay and love pants’… so maybe a few clever advertisers have beaten me to the punch, or maybe their automatic keyword tools have just selected ‘I am’ at random, either way I reckon they’re getting some low cost traffic off this keyword (estimated CPC 13p) but Vodaphone and O2 are missing a trick.

I know brand campaigns have their place and Orange have been quite successful in building a big brand from relative obscurity a few years back but I think if I was an Orange customer I’d have to question how much of my monthly tariff was going towards funding this campaign. Not to mention how much it was adding to my monthly bills buying half the country free cinema tickets every Wednesday and getting Rob Lowe and Macaulay Culkin to star in those ads. Personally I’d probably rather they spent a few quid on improving the technology so I could get a decent signal in my house!

Turns out this Mark guy’s raised a fair bit of cash for charity so I’m inclined to say if you’re interested you can sponsor him from his site- https://www.pedallingaround.com/start/. Who know’s, if he raises enough cash maybe he can afford to get the bus next time!

Apparently Orange in Poland where the iPhone has just been launched are paying actors to stand outside their shops to make it look like they’re queueing. T-Mobile who also have the iPhone in Poland have no queues!