If you’re a search marketer who keeps even a passing eye on the blogosphere, you will have heard about recent tweaks in the Google algorithm which has punished Content Farms. If you did miss the announcement, here it is: Google has changed its algorithm in such a way that websites responsible for producing keyword focused articles in huge volumes have seen their rankings disappear overnight. The farmer name was coined by Danny Sullivan, though internally it was known as the Panda Update. Like any Google update there’s been a huge amount of hand wringing and debate in the community. But most of the debate has missed the point. If you or your clients were being out-ranked by a content farm you had serious problems. A far more important issue is the potential inference in these changes. If these pages have lost their ability to rank they have lost their ability to pass a decent amount of link equity.

Many of the websites hardest hit by the changes would perhaps be better described as ‘article directories’ rather than content farms. It’s no secret that for many search agencies article syndication is a bread and butter part of any campaign. It’s never going to have a huge amount of influence in the search results but it has always been a tactic where you could be fairly confident X amount of hours in would produce Y amount of link building value. 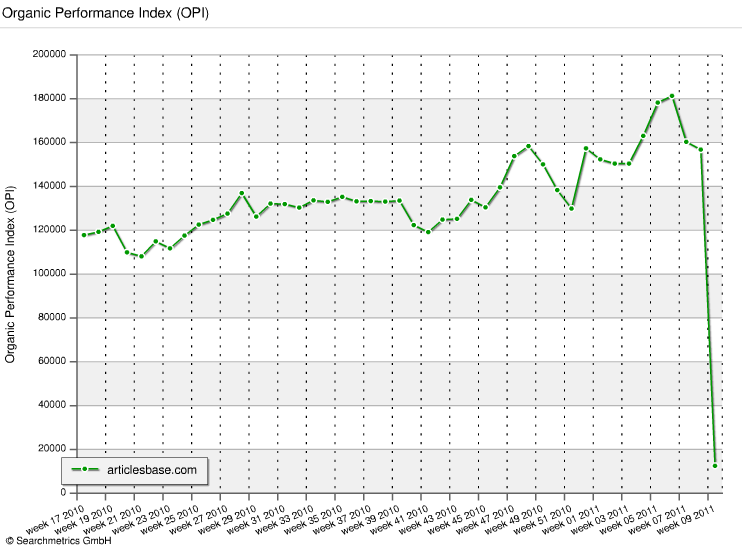 ArticleBase’s Tank Based On Searchmetrics Data

I’ll admit over the last few years it has become clear that the value was decreasing, but the question now is: have these changes reduced the value so much that as a task it no longer makes sense?

When it comes to judging the quality of a link I’ve always felt that site’s capability to rank was the best measure. If some of the least dodgy article sites have had a huge amount of their credibility wiped out overnight it’s not hard to believe that there link equity has gone in the same direction.

I’ve never been one for article spinning or any of that blackish-grey approach, and have always seen article writing and syndication as something that deserved time and attention. The result is that I’ve probably investing more time in the approach than many would. But for the clients my team and I work with it is essential every piece of content we produce, wherever it lives, is on brand and of the highest quality. That kind of commitment does take time, and in the past it was worth it, however I’m beginning to question that approach.

I think it’ll take a few weeks to see what impact this will have on the linkscape but the good news is any decent SEO won’t have been relying on just one tactic to build link equity. There’s also a good possibility that the changes might affect everyone in a similar way, but I do feel a bit sorry for anyone who put all their eggs in just the article syndication basket.