I’ve been reading a lot of the follow up to NMK’s recent Clients in the Wild event, where the crème of the social media savvy PR industry were gathered to discus the future.

Will McInnes from our friends at NixonMcInnes summed up his feelings on the event by asking whether enough PR companies are walking the walk when it comes to social media. 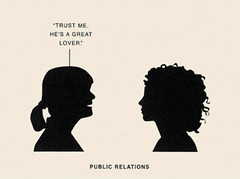 One of an excellent series of illustrations at Quick Sprout

This made me think of some simple but potentially hugely influential things established brands could do today that would allow them to dive headfirst into social media.

I’m not talking about ideas like, start a blog or setting up a Facebook profile, but real tangible actions they can take to spark conversation.

Challenge your biggest critics – if you are a major brand the chances are you’ll already have a few critics, no matter how well you behave (if you haven’t; you’re not keeping a good eye on your reputation or lying)

Reach out to these dissenters and give them an opportunity to express their opinion on your own site.

Don’t censure their feedback and encourage them to be completely honest.

Once you’ve got their diatribe, take some time, immerse yourself in it, and respond to their points. Be upfront, admit where you’d like to improve and explain where you fundamentally disagree.

This isn’t about spin it’s about showing the world that you can take criticism; you have conviction in your actions and want to respond to your community

Compliment your competitors – too many people in business are scared to acknowledge when their competitors are doing well. Some see it as acknowledging you own weaknesses; personally I think it shows you know your marketplace and that you have your eyes wide open.

Say who inspires you, whose successes you’d like to replicate and tell your audience how you intend to do it.

The benefits of communicating a clear of strategic vision will far out weigh the negatives of admitting your company isn’t perfect.

Criticise your competitors – in the same way people are scared to compliment their rivals, they are also scared to criticise them.

Now more than ever no business operates in a vacuum. If you ignore what they are doing it ruins any good work you do in social media.

If they’ve made a business move you disagree with, have launched an alternative product to your own or won an award you don’t think they deserved; you should be brave enough to speak up.

Don’t be petty and don’t do it all the time, but if you can be constructive, honest and create a conversation, your industry will respect you more than if you remained silent.

Illuminate your team – there are people who make your business work, don’t be scared to let them have some of the limelight.

Companies are reflection of the people who works there so don’t hide them away.

Allow them to have their own private blog, let them use Facebook while at work and encourage everyone from the most junior trainee all the way to CEOs to produce content on behalf of your organisation.

It’ll give them huge levels of confidence and it’ll make your company seem far more likeable. Relationships will flourish and so will the perception of your company.

Embrace Failure – not everything you do as a business will be successful that doesn’t mean you should sweep them under the rug. Acknowledge when things haven’t worked the way you’ve planned and use your community to better understand where you went wrong and continually improve.

Not many businesses have the confidence to take steps like this, but in the age of social media the community rewards the bold and the brave.